FYODOR DOSTOYEVSKY Fyodor Mikhailovich Dostoyevsky was born in 1821 at a Moscow hospital where his father was employed as a doctor. The family was poor, but their descent from 17th-century nobility entitled them to own land and serfs. Dostoyevsky’s mother, Maria, was loving and religious; his father, Mikhail, tended toward alcoholism and violence, and his 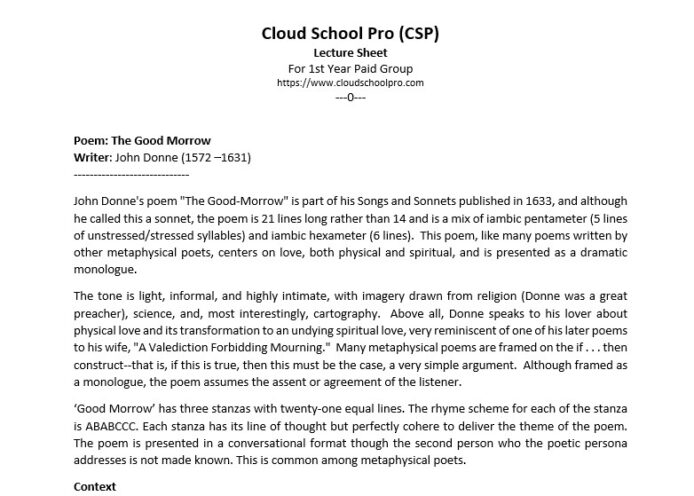 Poem: The Good Morrow Writer: John Donne (1572 –1631) —————————– John Donne’s poem “The Good-Morrow” is part of his Songs and Sonnets published in 1633, and although he called this a sonnet, the poem is 21 lines long rather than 14 and is a mix of iambic pentameter (5 lines of unstressed/stressed syllables) and iambic

Sonnet 18: Shall I compare thee to a summer’s day

Figures of speech in literature- Introduction to Poetry

What is a Sonnet

What is a Sonnet? Ans: A sonnet is a lyrical poem. It contains 14 lines. Its meter is iambic pentameter. A sonnet usually has a special arrangement of rhymes.

Discuss different organs of speech for producing speech sound with a diagram.

What is phonetics? Discuss the branches of phonetics

Answer: Phonetics is a level of linguistics that scientifically analyzes, studies and interprets the physical, psychological and physiological aspects of speech sounds. It deals with three main interrelated yet distinct factors of speech sounds. These are the production, description, and representation of speech sounds. Speech sounds are produced by a pulmonic aggressive air stream mechanism

Introduction to E. M. Forster E. M. Forster was born in 1879 and died in 1970, his life spanning almost an entire century. His father died when he was an infant, and his mother moved with him to Hertfordshire, where he spent some unforgettable days of his childhood. He studied at Tonbridge public school from

Ans: Anglo Saxon is one of the most important periods in the History of English Literature. Its time frame is 450-1066. The period brought some prolific writings that describe the history, life, and social phenomena of that time. Beowulf is one of the most remarkable pieces of writing of that age which contains detailed pictures

Discuss Saussure’s contribution to linguistics/concept of langue and parole

Answer: Ferdinand de Saussure is one of the most prominent figures in linguistics. He is a linguist, philosopher, and semiotician of the 20th century. He was born in Geneva, Switzerland on November 26, 1857. Saussure is the pioneer in expanding the area of linguistics to further development. According to him, linguistics is a branch of