Sonnet 18: Shall I compare thee to a summer’s day 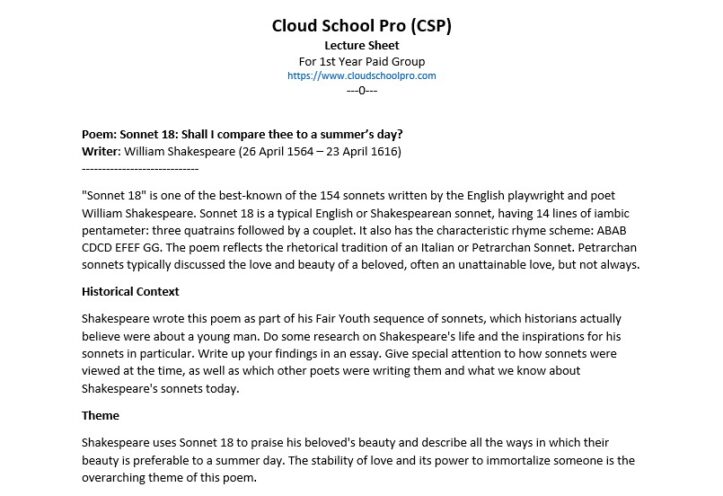 Poem: Sonnet 18: Shall I compare thee to a summer’s day?

“Sonnet 18” is one of the best-known 154 sonnets written by the English playwright and poet William Shakespeare. Sonnet 18 is a typical English or Shakespearean sonnet, having 14 lines of iambic pentameter: three quatrains followed by a couplet. It also has the characteristic rhyme scheme: ABAB CDCD EFEF GG. The poem reflects the rhetorical tradition of an Italian or Petrarchan Sonnet. Petrarchan sonnets typically discussed the love and beauty of a beloved, often an unattainable love, but not always.

Shakespeare wrote this poem as part of his Fair Youth sequence of sonnets, which historians actually believe were about a young man. Do some research on Shakespeare’s life and the inspirations for his sonnets in particular. Write up your findings in an essay. Give special attention to how sonnets were viewed at the time, as well as which other poets were writing them and what we know about Shakespeare’s sonnets today.

Shakespeare uses Sonnet 18 to praise his beloved’s beauty and describe all the ways in which their beauty is preferable to a summer day. The stability of love and its power to immortalize someone is the overarching theme of this poem.

The mood and tone of Shakespeare’s Sonnet 18 is one of deep love and affection. It is highly sentimental and full of feelings. This sonnet may seem at first to simply praise the beauty of the poet’s love interest.

The tone of William Shakespeare’s ‘Sonnet 18’ is an endearing deep devotion to friendship. The speaker in the poem emphasizes his adoration of his friend’s lasting beauty that will never fade like the beauty found in nature. The poet’s friend will remain alive forever in this poem.

Main Text
Shall I compare thee to a summer’s day?
Thou art more lovely and more temperate.
Rough winds do shake the darling buds of May,
And summer’s lease hath all too short a date.
Sometime too hot the eye of heaven shines,
And often is his gold complexion dimmed;
And every fair from fair sometime declines,
By chance, or nature’s changing course, untrimmed;
But thy eternal summer shall not fade,
Nor lose possession of that fair thou ow’st,
Nor shall death brag thou wand’rest in his shade,
When in eternal lines to Time thou grow’st.
So long as men can breathe, or eyes can see,
So long lives this, and this gives life to thee.

Should I compare you to a summer’s day?
You are lovelier and milder.
In May rough winds shake the delicate flower buds,
And the duration of summer is always too short.
Sometimes the Sun, the eye of heaven, is too hot,
And his golden face is often dimmed;
And beauty falls away from beautiful people,
Stripped by chance or nature’s changing course.
But your eternal summer will not fade,
Nor will you lose possession of the beauty you own,
Nor will death be able to boast that you wander in his shade,
When you live in eternal lines, set apart from time.
As long as men breathe or have eyes to see,
As long as this sonnet lives, it will give life to you.

The speaker opens the poem with a question addressed to the beloved: “Shall I compare thee to a summer’s day?” The next eleven lines are devoted to such a comparison. In line 2, the speaker stipulates what mainly differentiates the young man from the summer’s day: he is “more lovely and more temperate.” Summer’s days tend toward extremes: they are shaken by “rough winds”; in them, the sun (“the eye of heaven”) often shines “too hot,” or too dim. And summer is fleeting: its date is too short, and it leads to the withering of autumn, as “every fair from fair sometime declines.” The final quatrain of the sonnet tells how the beloved differs from the summer in that respect: his beauty will last forever (“Thy eternal summer shall not fade…”) and never die. In the couplet, the speaker explains how the beloved’s beauty will accomplish this feat, and not perish because it is preserved in the poem, which will last forever; it will live “as long as men can breathe or eyes can see.”

Sonnet 18 is perhaps the most famous of the 154 sonnets Shakespeare completed in his lifetime (not including the six he included in several of his plays). The poem was originally published, along with Shakespeare’s other sonnets, in a quarto in 1609. Scholars have identified three subjects in this collection of poems—the Rival Poet, the Dark Lady, and an anonymous young man known as the Fair Youth. Sonnet 18 is addressed to the latter.

The poem opens with the immortal line “Shall I compare thee to a summer’s day?” following which Shakespeare does just that, finding the youth’s beauty even “more lovely and more temperate” than that of summer. Here Shakespeare is at his most romantic, writing that love and the youth’s beauty are more permanent than a summer’s day, which is tainted by occasional winds, blistering heat, and the eventual change of season. While summer must always come to an end, the speaker’s love for the man is eternal—and the youth’s “eternal summer shall not fade.”

The young man to whom the poem is addressed is the muse for Shakespeare’s first 126 sonnets. Although there is some debate about the correct ordering of the texts, the first 126 sonnets are thematically interlinked and demonstrate a progressive narrative. They tell of a romantic affair that becomes more passionate and intense with each sonnet.

In the previous 17 sonnets, the poet has been trying to convince the young man to settle down and have children, but in Sonnet 18 the speaker abandons this domesticity for the first time and accepts love’s all-consuming passion—a theme that appears again in the sonnets that follow.

“Shall I compare thee to a summer’s day?

“And summer’s lease hath all too short a date”

“So long as men can breathe or eyes can see,

So long lives this, and this gives life to thee.”

Assonance is the repetition of vowel sounds in the same line. For example, the sound of /ou/ in “Nor lose possession of that fair thou ow’st”.

Alliteration is the repetition of consonant sounds in the initials of two successive words. For example, the sound of /l/ in “So long lives this” and /t/ sound in “to Time thou grow’st.”

Consonance is the repetition of consonant sounds in the same line. For example, as the sound of /r/ in “Nor shall death brag thou wand’rest in his shade” and the sound of /s/ in “So long lives this, and this gives life to thee.”

Imagery is used to make readers perceive things involving their five senses. For example, “Rough winds do shake the darling buds of May” and “But thy eternal summer shall not fade.”

Personification is to give human qualities to inanimate objects. For example, “Rough winds do shake the darling buds of May.”

It is a figure of speech in which an implied comparison is made between the objects that are different in nature. For example, “Shall I compare thee to a summer’s day?” though it is somewhat interrogative.

Rhetorical question is a question that is not asked to receive an answer; it is just posed to make the point clear. Shakespeare states rhetorical questions in the first line of the poem to put emphasis on his point. For example, “Shall I compare thee to a summer’s day?”

There are two constructive lines of verse in a couplet, usually in the same meter and joined by rhyme. This sonnet ends with a couplet, which usually reveals the central idea of the poem.

End Rhyme is used to make the stanza melodious. Shakespeare has used end rhyme in this poem such as; “see/thee”, “day/May”, “Temperate/date” and “shade/fade.”

It is a type of meter having five iambs per line the poem follows iambic pentameter such as; “Shall I compare thee to a summer’s day?”

A sonnet is a fourteen-line poem usually written in iambic pentameter. This Shakespearean sonnet has its octave and sestet.